Last week, Sadie and I took a quick trip to Paris. My uncle Joel and his fiance, Charles, were visiting there so we headed over to meet up with them. Sadie has historically gotten a little afraid with meeting new people, especially men, so before the trip I showed her pictures of Joel and Charles so she would know what to expect. It worked great and she ended up really liking both of them. We had some good meals at which Sadie surprisingly behaved herself and she was such a trooper, going the whole day with no nap and going to bed around ten!

This trip to Paris was a lot more relaxing than our previous one. We weren't just constantly going and trying to fit in as much as possible. My hotel was pretty close to the Bataclan theater and there was a pretty big military presence in the city. There were armed soldiers stationed on the street where I was staying and also elsewhere in the city.

Anyway, most of the pictures I took were of Sadie at Versailles so here we go! They are pretty much all action shots since she never stops moving. 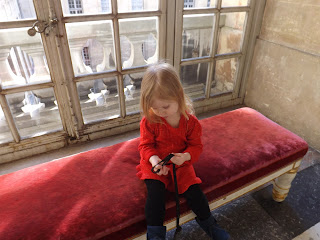 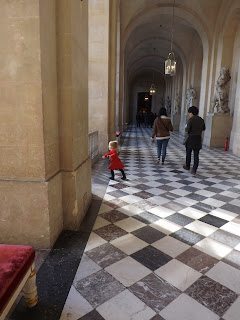 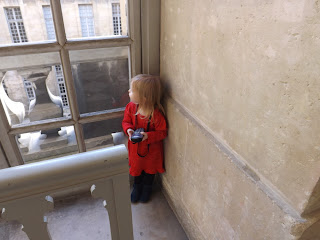 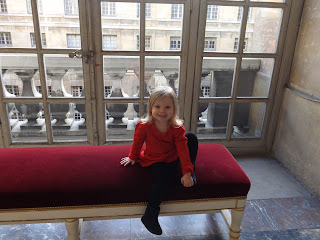 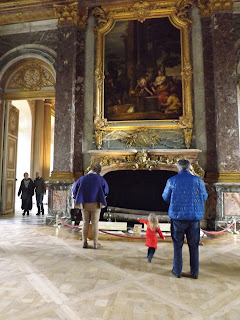 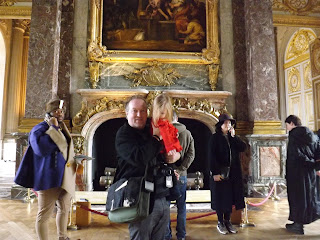 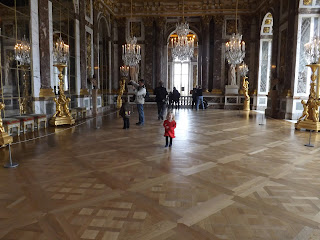 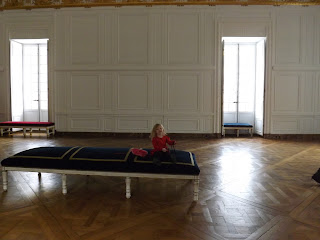 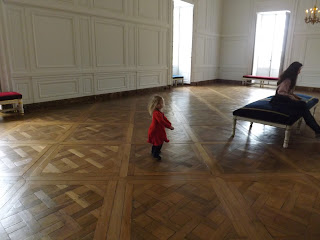 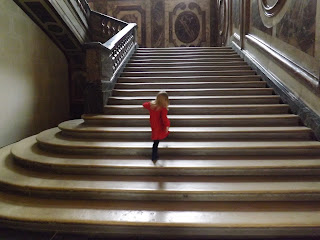 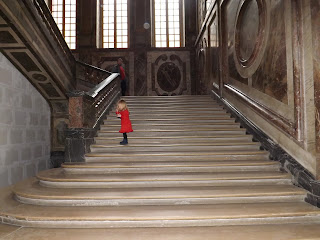 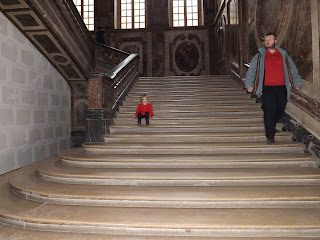 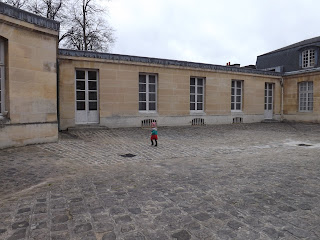 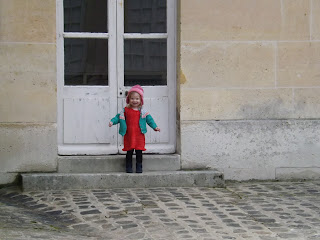 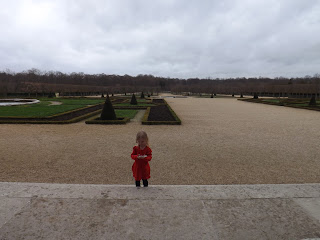 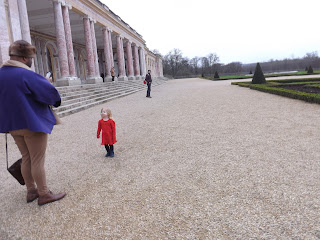 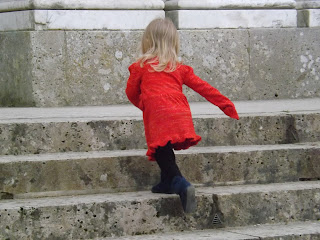 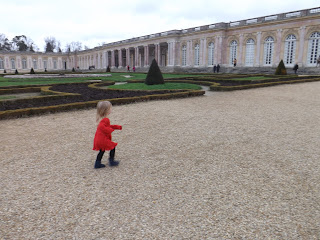 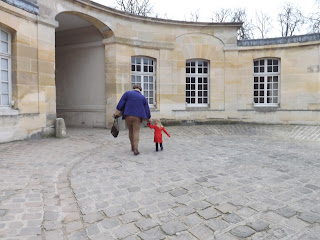 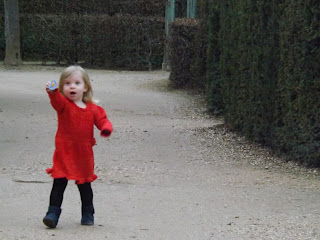 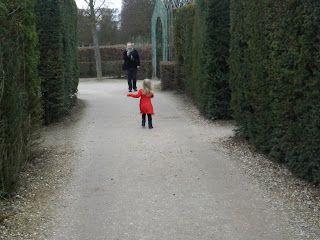 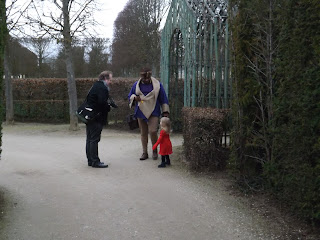 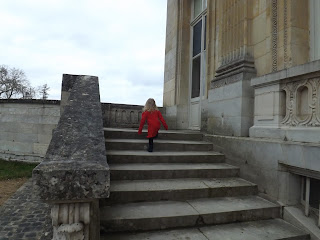 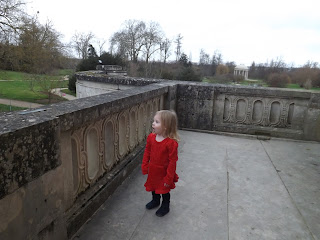 This last one is just in front of a random fence by the marche aux puces. She just stopped there and asked me to take a picture of her. 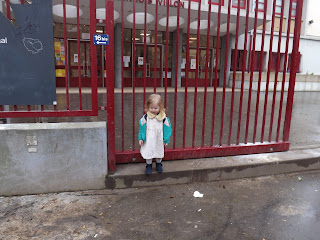 It got pretty rainy on the last day we were there, but I did get some pretty cool '50s dresses at the flea market, and I even managed to talk the guy down. Basically every time I go to France, I realize how much more comfortable I am with French than with German. We ate at one place where the waiter either didn't or wouldn't speak English, and I even managed to ask questions and stuff about the menu with no major problems. Sadie and I will be going back to Paris in March to see Disneyland and I hope to get some more pics then!
Posted by sariasister at 6:57 AM No comments:

So, as I have done in previous years (which you can find here and here) I have made a list of the best books I read this year. There was no set number when I set out to make this list; I just looked through the books I had read and picked the ones that I still really remember liking or that stuck with me in some way. Also, this is books I read this year, not necessarily that were published this year (and in fact, most of them weren't). I've included notes on what I liked about the books and clicking on the covers will take you over to Amazon if I've piqued your interest.

Freakonomics came out a few years ago and was just so freaking interesting. The authors explore sort of strange questions about society through an economic lens. I could not stop quoting little facts out of here as I was reading it. I recently purchased another book by the same authors that I'm looking forward to reading in 2016!

Amanda Palmer is a polarizing figure, but I've been a fan of hers for I guess over ten years now. In her memoir (which I listened to on audio, read by the author) she details her time as a street performer up until her massively successful Kickstarter campaign and the aftermath/backlash it caused. The book isn't written with the assumption that all of the readers are fans of hers, so even if you aren't familiar with her music or art it's still a great read.

This was the first thing I'd ever read by Caitlin Moran. I picked it up because it was about a teenage girl who was into music and I was a teenage girl who was into music! The cover references The Bell Jar, and there are definitely some similarities there. While the previous two books I would recommend to anyone, this one I think is targeted toward a pretty specific audience. It was catnip to me, but if you aren't into reliving your most awkward and cringe-worthy moments then don't even read the first page.
Runner-up: How to Be a Woman

by the same author. It has a lot of funny and insightful observations on feminism. Since I read and rated it five stars, a few of it's more problematic aspects have been brought to my attention, but I still really enjoyed reading it. Moran's voice is so conversational and makes me thing we would get on really well.

I got an e-galley of this book through NetGalley and it was the only book of the year I actually stayed up late reading because I had to finish it. I just couldn't put it down and my heart was pounding the whole way through. The premise: two friends get tickets on a weight-loss cruise designed to promote a new sweetener. Then, things get weird. Really weird. And gross. Definitely not for the squeamish.

Here is another one that I went with the audio version. There are actually two audio versions, one read by a woman and one read by a man. There is nothing in the text to indicate the sex of the narrator, which is an interesting conceit. Despite that, the book isn't about gender issues as such; it seemed to me to have more to say about disability. This is a great example of what sci-fi can do at it's best: change a little thing about society and imagine how it would affect the world.

This another memoir where I listened to the author read the book. As with Palmer's book, you don't really need to know anything about Day's career to like what she has to say. In fact, one scene in the book has her being recognized by two girls while an older woman looks on, refusing to believe she is famous. This is the book from this year that I found the most inspiring. If you are an artistic type or just someone who doesn't fit in, Felicia gets you.

I recommended this book loads of times on Reddit, whenever someone asked for a good scary book. This was freaking horrifying. Boy scouts are trapped on an island with... something that is killing them. It's also incredibly gory so this is another one to skip if you have any level of sensitivity to gore. Hunter actually asked me to stop telling him about stuff from this book because it does get really gross. But if you want a good, suspenseful scare, I can't recommend this book enough.

If you read only one book because of my recommendation, make it this one. This should be required reading for every American. It made me look at American culture and the immigrant experience in new ways, it made me think about race in different ways, and although the main character's life was drastically different from mine it also reflected my experience as a fish-out-of-water in another country.

The third book on the list I listened to in audio format, read by the author. You might think that this book is for Patti Smith uberfans, but you would be wrong. Honestly, I didn't know that much about Patti Smith or Robert Mapplethorpe before I read this book and that didn't really matter. Smith's folksy voice and idiosyncratic pronunciations made it an amazing audio experience and her descriptions of New York City in the 60s and 70s, while largely fond remembrances, don't fall into the trap of glamourizing or romanticizing it.

Here's another book that seems like it might be enjoyable only to a niche audience, but I don't believe that's the case. Granted, I am a "gamer," so I don't fully know how a non-gamer would feel about it. But Ryan doesn't assume his readers are already familiar with everything he's saying and he doesn't use gamer jargon. Nintendo's story is pretty fascinating from a business perspective, which is really what he's writing about. We all know what Mario looks like, but how did he become such an institution?

So there you have it. I read a lot of mediocre books this year, but there were some standouts. As you can tell from the list, I'm developing a habit for memoirs. While a lot of the time, an audiobook ready by the author isn't as good (because they aren't professional readers, usually), memoirs don't really suffer from that because it's like the person is really telling you their story.

Stay tuned: in a few days I'll put up another post of stats and graphs comparing this year in reading to past years.
Posted by sariasister at 11:54 AM No comments:

Email ThisBlogThis!Share to TwitterShare to FacebookShare to Pinterest
Labels: books

Thought I would do a quick post with some pictures of Sadie engaged in some pre-Christmas activities.


We took Sadie to the Christmas Market and thought she might enjoy the merry-go-round. Weirdly, it wasn't like ones in America where the entire platform turns; the cars/horses/whatever actually moved around. This meant that an adult couldn't stand on it next to her. We weren't expecting that but we gave it a try. She really had a lot of fun just sitting in the car. However, once it started up she was not happy. She was crying, looking around for us, and eventually started trying to get out. Hunter had to grab her off as it was moving by because we really thought she was going to launch herself out of the little car. For a while after, she would still bring up the "scary car." I guess she just wasn't ready to ride by herself. 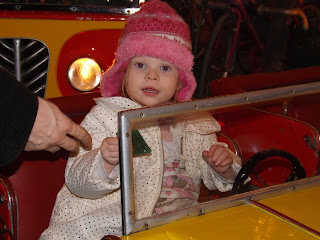 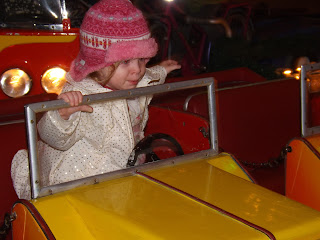 So, after the carousel fiasco, I thought she might like to try some kinderpunsch, which is basically non-alcoholic gluhwein. However, she drank too much of it through a straw before it was fully cooled and spilled it on herself, so that was also a bummer. I couldn't even get her to hold the boot for a picture so here she is sitting next to it. 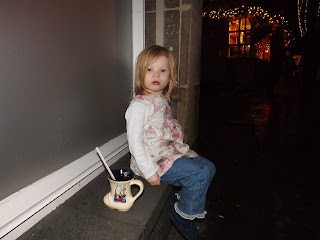 But, not everything was terrible! I got us a small Christmas tree (you can see, it's pretty close to Sadie's height) for our apartment and Sadie had fun helping us decorate it. We don't have a ton of ornaments for it but Sadie is enjoying it and not tearing it apart. 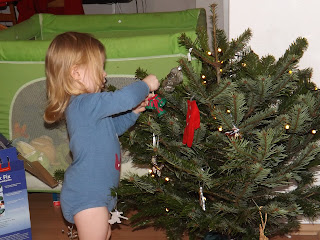 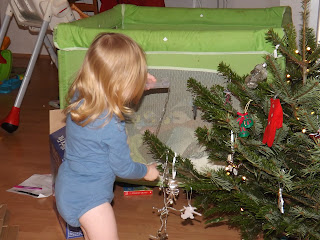 Merry Christmas, everyone! I hope to have some more pictures of little Sadie to post soon!

Posted by sariasister at 10:45 AM No comments: